Despite a slow start, 2022 was a year of extremely high activity at Lithuanian airports, with 5.35 million passengers handled, twice as many as in 2021, with nearly 2.47 million passengers handled. The airports also operated almost 51,000 flights, which is almost 48% more than the previous year. The aviation sector is said to have not only recovered last year but also entered a growth phase.

According to the representatives of Lithuanian Airports, in 2022 all three airports have managed to restore more than 80% of the pre-pandemic passenger numbers (in 2019), and Kaunas Airport has already reached the 2019 level, with the total number of regular flight routes even surpassing 2019.

“The first quarter of 2022 was not the most desirable quarter for travellers, as the pandemic meant that there were a lot of additional checks and restrictions in place at the time, which had a negative impact on airports and the overall aviation market. However, from the second quarter onwards, activity picked up sharply and by the end of the year, Lithuanian Airports recorded a very strong recovery and, in some categories, even higher than before the pandemic. We have clearly seen that the growth potential and willingness to travel was not diminished by the challenges of the pandemic, and in many cases on the contrary - we have even seen an increased willingness to travel, which continues to this day,” said Tomas Zitikis, Head of Route Development of Lithuanian Airports, in his review of the past year.

According to him, in 2022, Palanga Airport was the most active airport in terms of flights and passenger numbers - passenger traffic grew more than three times compared to the previous year, and 65% more flights were handled in the airport. It is worth mentioning that in 2021, Palanga Airport did not operate flights for more than a month due to airfield reconstruction works.

According to the expert, Kaunas Airport was the most surprising last year. In April, it not only caught up with 2019 results, but also exceeded them, and this growth continued until the end of the year. Last year, Kaunas Airport handled as many as 1.16 million passengers, which is essentially the same total annual result as recorded in 2019 (99.8% of the pre-pandemic passenger traffic).

“We are constantly negotiating with our partners to offer passengers new and attractive destinations from Lithuanian airports. Last year, we were able to offer almost 100 direct destinations, compared to 92 destinations in 2019. This growth is the result of our consistent and ambitious work.” - says T. Zitikis.

He also noted that load factors continued to rise consistently, with low-cost airlines filling an average of 80% of seats and traditional airlines 63% of seats.

Looking at last year's statistics, the aviation specialist not only positively evaluates the good results of last year, but also forecasts an increase in the cargo traffic through Lithuanian airports.

“In the cargo category, the figures are certainly optimistic - last year the number of cargo at all Lithuanian airports grew by almost 4 % and amounted to more than 21 thousand tonnes. We have seen the growing potential in this area for several years in a row, and in 2023 we are planning an even higher number of cargo transported through Lithuanian airports,” says T. Zitikis. 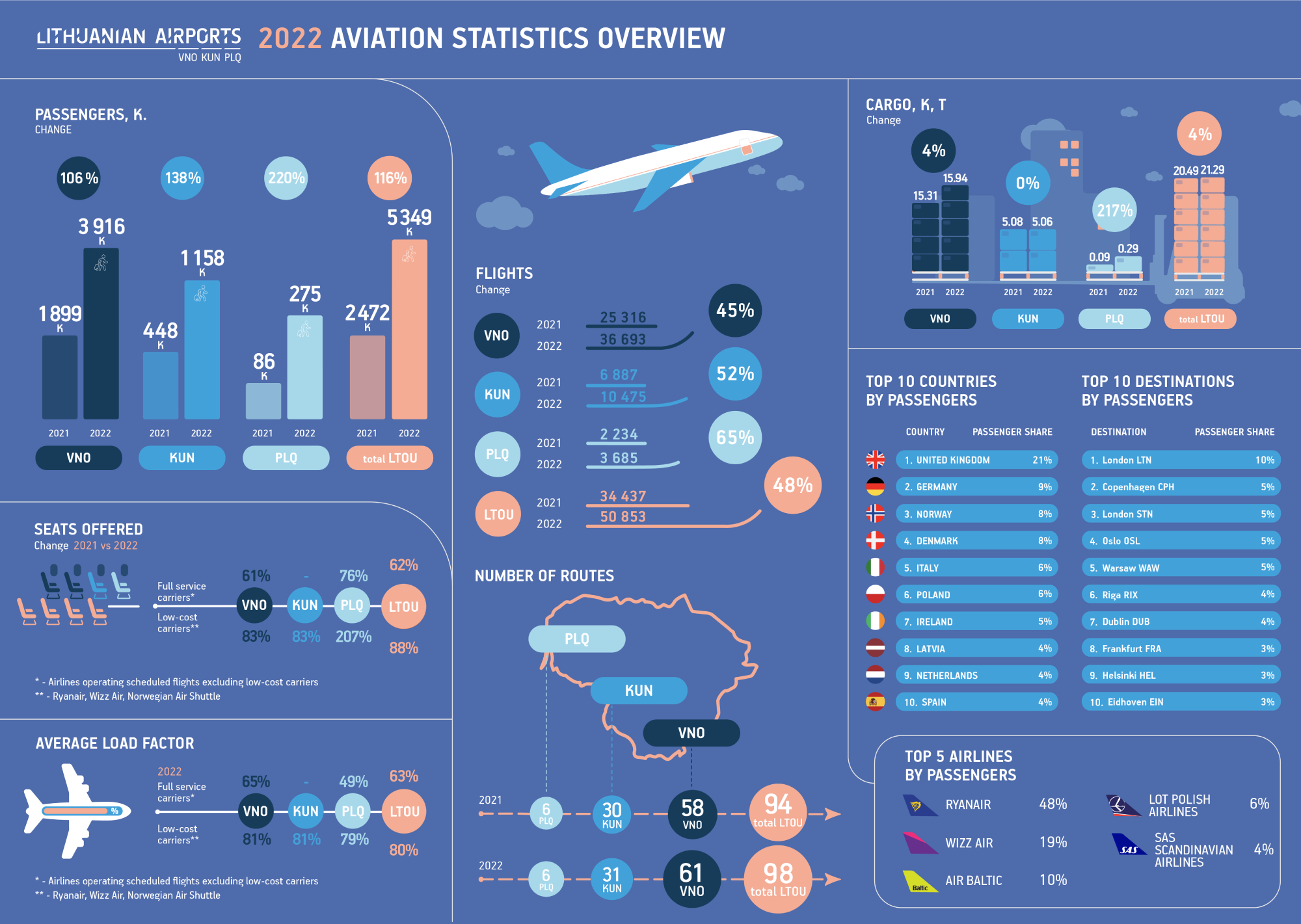